FENC believes in “benefiting from the society; returning benefits to the society”, which has been driving the Company’s commitment to charity work for half a century. Social engagement has been internalized as a key aspect of corporate culture at FENC, which is demonstrated in two ways. One is through contributing the Company’s core strengths or factory resources to the public and the society, such as holding FENC Classic Marathon, promoting education on recycling, as well as engaging in volunteer service and community maintenance. The other is through long-term sponsorship to nonprofit organizations, including schools, hospitals and charitable foundations. By providing resources for education, medical services, environmental protection, development of technological innovation, and arts and culture, the Company is enhancing public welfare, broadening international perspective and improving the competitiveness of the entire society. 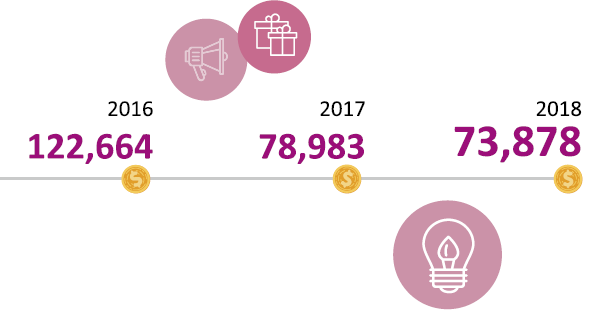 Before 2016, the Company had not used indicators or monetization principles to assess the social value nor impact of its public-interest advancement activities. Starting 2016, the Company introduced social return on investment, or SROI, as an instrument to assess and analyze the costs and benefits of the 7th FENC Classic Marathon held in 2015. It was found that the event generated NT$131 million worth of social return, 8.19 times the resources invested. That is to say, every NT$1 invested produced NT$8.19 worth of social benefit, indicating a very high return rate. The results will be published in a conference in 2017 to encourage both industry and academia to adopt SROI in evaluating public-welfare advancement.

Social return on investment (SROI) is used to assess the impact of the social value of a project on different stakeholders and express the results in monetary values. Originating in Europe, this analysis framework is used by the U.K. government as a management instrument to weigh the social value of a non-profit project against the resources invested. The tool is also widely adopted by non-profit organizations to measure their performance. Therefore, companies can use it to identify the social impact of their different projects aimed to promote public interest and show indicators of changes after the projects have been carried out. In this way, companies can improve the performance of ongoing projects and make informed choices when considering several projects.

By some estimates, there are millions of runners in Taiwan, a country where 700 to 800 road-running events are held each year. In fact, Taiwan ranks as one of the highest in terms of percentage of runners and running events. A single running event can affect various stakeholders, including runners, volunteers, organizers, government agencies, the local people, and road users. There are always thousands, if not tens of thousands, of people involved. If we consider preparation and promotion in the lead-up to the event, the scope of its impact is immense.

The Company began organizing the FENC Classic Marathon for the first time in 2009. The event has since expanded year by year with a growing number of registered runners. Our SROI assessment focused on the marathon held in 2015 and considered 6,006 runners, 850 volunteers, 180 local stores, and more than 10 corporate and private partners and government agencies as our stakeholders. We conducted more than 10 interviews and sent out 250 questionnaires to determine the resources invested in this event, including registration fees, time spent on pre-event practice, volunteer training, the marathon race, and vendor set-up, as well as supplies and services sponsored by our partners. The substantial returns of the event encompassed health benefits, interpersonal relationships, the fulfillment of participating in a long race, the sense of achievement after crossing the finish line, corporate cohesion, sales of products, and marketing campaigns. The costs and benefits of the event were calculated based on the statistics provided by academic papers in Taiwan and abroad. The results reveal that the total cost amounted to NT$16.05 million, while the total return reached NT$131 million, 8.19 times as much as the resources invested.

The results of the SROI analysis will serve as a reference for the planning for the 9th FENC Classic Marathon in 2017, in the hope of generating more positive impact and greater benefits for our society.

Far Eastern Memorial Foundation cares for the development of society and has been issuing forward thinking policy white paper to advise the government. Aging society and elderly care pose difficult challenge in the modern society. In 2018, Far Eastern Memorial Foundation issued the 5th and 6th white paper entitled “The Rights of Foreign Caregivers under the Need for Long-Term Care” and “Advanced Development and Application of Smart Technology for Senior Care” to explore technological applications and elderly care. The papers integrate international and local policy perspectives and proposed elderly care policies that tailor to the needs in Taiwan.